When I left for Thailand over 6 years ago, I could have used a little direction. Wandering the streets alone, unable to speak the language, and close to being flat broke, a travel guide or at least some good Thailand traveling tips would have really come in handy. Little did I know that what was once a daunting country would turn into a second home, and a trip that I thought would only last 7 months would result in me not coming back to home for years.


While traveling I chronicled my experiences as best as I could, but in an effort to “be in the moment” I didn’t always have a camera on me. I was there for a while, but I still didn’t make it everywhere that I wanted to go. Having said that, here are my “Don’t Miss” locations if you are there for a two-week trip. Finally, keep in mind that in Thailand they don’t use our English characters so some of the spellings that I have here might be a bit different elsewhere but for the most part they’ll be the same. So here we go!

Huge question right here, but in my mind, you can’t go wrong. No matter where you go in Thailand you will meet the nicest people, eat the best food, and see some of the greatest sights. When traveling to Thailand, just keep smiling and you will have the time of your life, in fact, you may not want to return!

An amazingly vibrant and large town with an equally amazingly vibrant and large name: Krung Thep Mahanakhon Amon Rattanakosin Mahinthara Ayuthaya Mahadilok Phop Noppharat Ratchathani Burirom Udomratchaniwet Mahasathan Amon Piman Awatan Sathit Sakkathattiya Witsanukam Prasi, wow. Known to the locals in short as Krung Thep, which translates to “The City of Angels”, Bangkok is home to just over 6 million residents in just over 600 square miles. If flying right into here, prepare for a culture shock and a great time!


Temples
Now I don’t claim to be an expert on temples, but I certainly have seen a few in my day. Known as “wats”, Thai temples are some of the most gorgeous in South East Asia, and since the country is roughly 95% Buddhist, expect to see some of the most exquisite Buddha statues you’ll ever see. If you plan to go to a temple, remember to be respectful and cover your shoulders and knees. Thais are incredibly respectful, so please show them the same respect when you visit their holiest shrines. You might be able to see the vast majority of these in one day, you can just set it up with your tuk-tuk driver beforehand and make sure that you don’t get scammed.


Grand Palace: Exactly what it sounds like, lavish, decadent, regal. Since the late 1700s to about 1925, this housed the King of Siam, which included everything in Thailand but the North.


Emerald temple, Wat Phra Kaew The most sacred Buddha in the country, this statue is stunningly sitting in the middle of an entire temple solely dedicated to housing it.


Reclining Buddha, Wat Pho Not to be missed, this 150-foot long statue of Buddha lying down is so grand that it is quite difficult to even document in pictures without a very wide-angle lens. 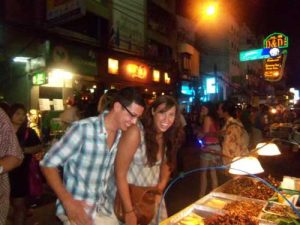 Khao san road— Whether you pop into nightclubs, bars, or just walk around with a beer from 7/11, you are sure to have a blast, you’ll see.


Mo Chit — the biggest market in South East Asia, only open on weekends. When teaching, I used to live right by here and never grew bored of it. This market is equal parts intimidating and amazing. Inside you can find baby clothes being sold next to swords being sold next to puppies.


Floating market—Anything you could ever need, but on water.


Cruising around Nana and Siam—Just for your taste of all things Thai.
Cheap Charlie’s is a great little bar that has been there forever, nestled between skyscrapers and street food vendors. 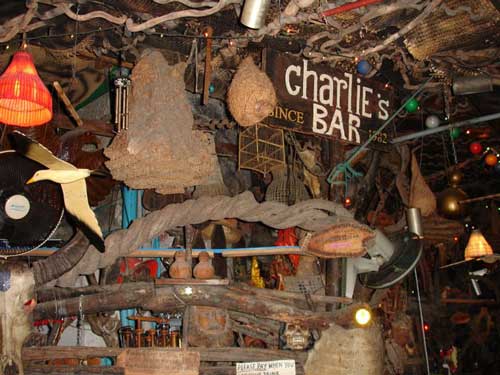 This is often overlooked but one of my absolute favorites. The train there alone is beautiful, probably 3 hours away from Bangkok but worth a night’s stay. The Bridge Over The River Kwai was based here, a story about where the Japanese had war prisoners during WWII and the subsequent Stockholm Syndrome that ensued. Plus, Erawan, the Seven Tiered Waterfall is stunning.

Chiang Mai, has the most culture of most places in Thailand in my opinion, including the country’s oldest temple. When I was here it was for the water festival Song Kran so I was doing more celebrating than sight seeing, but you can’t really go wrong here. One thing I would not do is a “jungle trek”, it’s completely fabricated and they beat the hell out of their elephants.


Elephant Nature Park
The Elephant Nature Park takes in elephants from surrounding areas where they have been abused, forced to live in the unnatural city, or otherwise mistreated. Their savior’s name is Lek, meaning small in Thai which can refer to the size of her stature but certainly not her heart. You will learn an incredible amount about how amazing elephants are and what we can do to help. All money spent goes to support the elephants. Go here, please. 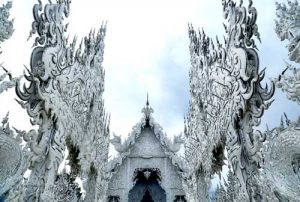 White Temple Known as Wat Rong Khun to the locals, this privately owned, modern temple is an interesting one. The main themes that I picked up were birth, death, heaven, hell and evilness but even after my research it appeared that Wikipedia itself was stumped. In fact, here is a direct quote from their database.

Murals depict swirling orange flames and demon faces, interspersed with Western idols such as Michael Jackson, Neo from The Matrix, Freddy Kruger, and a T-800 series Terminator. Images of nuclear warfare, terrorist attacks, and oil pumps hammer home the destructive impact that humans have had on earth. The presence of Harry Potter, Superman, and Hello Kitty confuses the message somewhat, but the overall moral is clear: people are wicked.”

Pu Chi Fa—Just outside of Chiang Rai, this is a beautiful overlook where you can see into Laos. Best to rent a motorbike, spend the night in the area and go for sunrise.

One of Thailand’s most beautiful beaches and everyone knows it. It’s a party island so you’ll know when you want to leave, 2-3 days is plenty for most. Also, sometimes it’s not the cleanest due to its popularity. 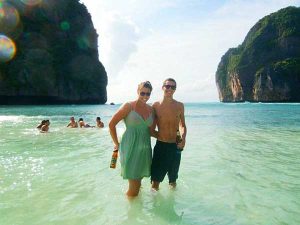 Jackie and Brian at Maya Beach

Look out (You can’t miss this, sunset is amazing, sunrise probably beautiful too)

Long beach Swimming with black tip reef sharks at dawn/dusk. You might be able to just be able to just ask around by saying pla chalam. Just remember when you find them that these guys are not dangerous in the slightest.

A little further away, but in my opinion Emerald Cave is completely worth it.

Ko means island. Tao means turtle. This spot is perfect for backpackers and travelers looking to explore the ocean depths. While living and teaching in Surat Thani, I frequented in my mind the best damn dive shop that I have ever been to, Scuba Junction. Expect to see tons of fish, sea turtles, and who knows, maybe even the great whale shark.

This island has a split personality. Known for both wild Full Moon Parties and also some of the most relaxing beaches around, you’re sure to find what you are looking for.

I am a bit hesitant to give out this gem, but just note that it’s not for a faint of heart. 10 days of no talking, daily meditation, no reading, writing, or electronics and sleeping on a stone bed with a wooden pillow. However, if you make it through (which I barely did) you’ll feel absolutely amazing.

To be polite, guys end phrases with krup, and women end in ka. In Thailand, you can never be too polite! Also, don’t worry about mispronouncing anything, you will, but they are all used to it.


Don’t worry about it— Mai pen rai (You’ll hear this all the time, it’s kinda their anthem.)


Foreigner—Folang/forang You will hear this a lot too. As far as I could gather, it wasn’t derogatory in any way and either means apple or Frenchman, depending on who you ask.

You can bargain the price of just about anything that isn’t written down or a food item. If you get quoted a price, chances are it’s at least 1/3 too high. Don’t be offended, it’s just that merchants can often make good money this way to unsuspecting tourists so they try to do it often. Smile, offer lower but remember how little money you are bargaining for. When in a taxi, make sure that they put on the meter. I chose to go tuk-tuk most times, bargain here too.


You will probably be asked to buy stuff as you are walking the streets. If you don’t want it or just want to be left alone, say Mai (not) ow (want) followed by either ka or krup depending on your gender. 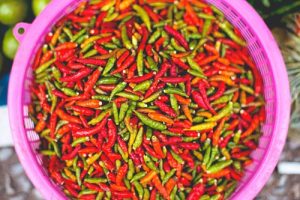 Thai spices on the street in Bangkok 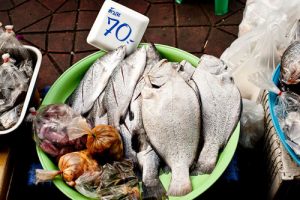 Salted fish for sale in Thailand


Oh yeah, it’s worth mentioning there are a lot of squat toilets there and they don’t often have toilet paper, so it might be a good idea to bring your own. They do have hoses that the locals use, strange at first but does the job. Don’t get too caught up on this, everybody poops, we all just clan up differently.

A note about etiquette: Thais are very understandably prideful they don’t like to “lose face”. Remember that it is a Buddhist country which may have guidelines that you may not be used to. The head is seen as the holiest part of the body since it is closest to the heavens and the feet are the dirtiest since they are in contact with the ground. With that in mind, don’t touch anyone’s head or show the soles of your feet to anyone! On that not, the Thai’s love their king. Under no circumstances should you badmouth him.

Most Importantly, Enjoy Yourself

When I was in Thailand I had the opportunity to see a mix of travelers. Some people we’re laid back, tried to learn the language, and didn’t fuss if a bus was an hour late (which it will be.) Others stressed, would get agitated, wouldn’t try with the language, and ultimately didn’t enjoy their time there. Be the first kind of traveler. Smile. Enjoy your time. Pack light. Seriously, chances are there is nothing that is more expensive in Thailand than where you are coming from, and there are more 7/11s per capita than most other countries.

I know that there are a lot of you out there that know a lot about Thailand. Instead of this being a final document I am constantly editing and updating this article. Did I overgeneralize? Did I miss anything? Am I just plain wrong? Please let me know in the comments, I’d love to hear from you!