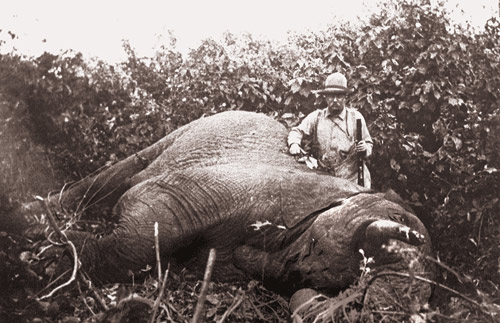 Teddy Roosevelt with an Elephant that he shot and killed

If you are anything like me you have Googled “how to save the rhinos”, “how to help save elephants” and “How can we stop elephant poaching?” as well as similar phrases many a long night. Ever since I can remember I have daydreamed about protecting endangered or threatened species but without a clear way of doing so. Just about everyday I read about thwarted attempts to sell ivory, indicating that although many countries are doing their part to stop the selling, we still have a long way to go before it ultimately becomes a thing of the past.

Unfortunately, this practice is nothing new. In addition to once being used for keys on a piano, ivory has also been used for thousands of years as a sign of wealth, and even ingested as a powder for medicinal purposes. Although I myself do not understand it, the practice was at one time quite widespread and accepted and continues to be both in many Eastern countries. 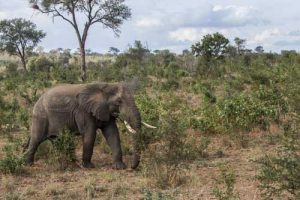 It was only relatively recently in 1989 that CITES (the Convention of International Trade in Endangered Species) tried to regulate and ultimately ban its trade. Reports show that as much as 70% of ivory ends up in China where the disturbing trend of consuming and exploiting threatened species are considered a sign of wealth. Among elephants and rhinos, sharks have been experiencing a decline with the rise of shark fin soup, which is said to help produce vitality and good fortune. With China’s economy only showing signs of growing, one can speculate that this practice will continue exponentially in the future unless something is done.

What is being done

When I asked my Kruger safari guide for suggestions of what we can do, he explained the lengths that they have already gone to in order to save these colossal creatures. With varying degrees of success, park rangers and scientists all over the world have tried everything from dyeing the horns to make them less appealing, to injecting them with poison so that if they are in fact ground up for medicinal purposes, the user will be violently ill and will swear off ingesting ivory products forever.

Spread the News On How You Can Help Save Elephants

Luckily, some countries are coming around and if you boil it down, it all seems to come down to awareness. Although it may come as a surprise, many people are unaware that in order to get the ivory they seek, that an elephant or rhino must give their lives. I challenge anyone to interact with these amazing animals and still come away careless whether they are exterminated from this planet.


As with many situations, money also talks. There is big business in illegal ivory trade, and studies show that people who are involved in the distribution of ivory are also involved in movements of weapons, drugs, sex trafficking and other nefarious things. If awareness helps from the top down, income can help from the bottom up. Show people the worth of these animals and raise your voice with AVAAZ, donate to the parks that work with elephants and rhinos or, better yet, go to the parks yourself and witness their majesty firsthand.


Want more info on how to help? Check out some great sites to help save the elephants-