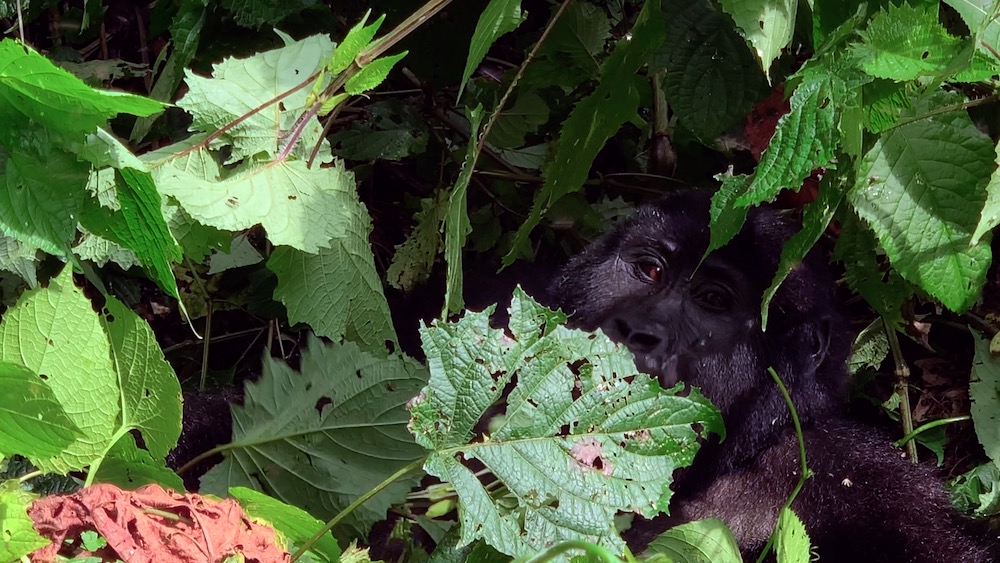 When thinking of romantic getaways, Uganda generally isn’t the destination that comes to mind to most people. It was, however, for us.

The decision wasn’t particularly easy, however. There was Kimberly Endicott, the American tourist that was taken in April by Congolese terrorists, there were confirmed cases of ebola that had grown slowly but steadily, and of course, there were overall difficulties that logistics such as shots, medication, and price always provide.

However, there is always a reason to say no, and, confident with an incredible tour group, we decided to pull the trigger.

Seeing the mountain gorillas has always been a dream to Jackie and me, and last year when we got married, we knew that it was an opportunity that we would most likely never have again.

In addition to mountain gorillas, Uganda is home to many other primates, including baboons, golden monkeys, vervet monkeys, black and white Colobus monkeys, red-tailed monkeys, and one of the other great apes, chimpanzees.

However, the mountains of Central Africa are in jeopardy. Uganda is cited as one of the most mineral-rich countries in the world, including gold, and coltan, a mineral used in the production of everything from cell phones to space shuttles. This puts the area in peril, and knowing both the economic and governmental state of Uganda, it may become difficult for them to stave off mining advances coming from the US, Europe, or China.

Mercifully Uganda knows the renewable riches it has, and, for the time being, is able to utilize tourism as the veritable lifeblood for the country. After all, central Africa is the one place in the world where one can see two of the three great apes-chimpanzees and gorillas. Before embarking to Uganda, our goal was to see both and we had no idea how breathtaking they would indeed be.

Jona, our tour guide was formally trained by Jane Goodall to help habituate the chimps so that they could be both studied and also viewed by tourists, whose income help sustain the chimps very survival.

Jonas’ job was to walk with the chimps, day in and day out, and get them accustomed to the presence of humans. This habituation process started at six in the morning, stretched for 12-13 hours, and entailed watching the chimps eat, make a nest at noon and then sleep until 4, get up and eat for a few hours.

After a few years of doing this, the chimps will grow old enough to gain the confidence to face the intruder. At that point, they charge, scream, and wield a stick intended for beating the human interloper. This image was startling enough, but knowing that chimps are regularly 2-3 times stronger than a human really puts it into perspective. Based on instructions from Dr. Goodall, it was Jona’s job to no sell this, and even pretend to be eating when the chimps feigned attacking. After that, the chimps would be seen as being accustomed to the presence of humans, while still being wild animals, and they were seen as fully habituated. Luckily, I learned of this charging behavior after we tracked the chimps ourselves.

Before the trek began, our guide Evelyn explained that there were plenty of methods used to track the chimpanzees, starting with listening to the chimps, seeing and following fresh knuckle prints, seeing the fresh droppings, checking on the trees with fruit and hoping that chimps will arrive, and finally, sheer luck. We managed to find them the last way.


While walking, I took up the rear, doing the videography thing as the group moved forward. Suddenly, I had the sneaking suspicion that I was being followed. I slowly turned around and saw a dark, shrunken figure on the path behind us. From there, the story varies wildly depending on who you ask. I maintain that I calmly called to the rest of the group in a cool and confident voice that there were chimps following us. However, anyone else in the group had a different take, claiming that my voice might have had a tremble and lilt of a startled city-boy.

Details. Either way, the chimps walked past us and directed us right to their family. Seeing the chimpanzees was a surreal sight, but hearing them communicate was even more unworldly. Caught up in the moment, I did the unthinkable and turned the camera to myself, specifically for posterity for myself, but thought I’d share it here for the full context of the moment.

Chimpanzees share roughly 98% of genes with humans, and when seeing them in the wild, the similarities between chimps and us are very apparent. Chimps use weapons and often charge each other with sticks and rocks. They use tools, injecting a stick in beehives and using the other hand to cover their faces. A few times a month they eat and kill Colobus monkeys, both for a protein stimulation as well as an effort to maintain regional dominance. They even utilize crude methods for water filtration—when thirsty, chimps don’t drink directly from potentially dirty sources, but instead, dig a hole in the surrounding sand and wait for the water to filter in. From there, they use a pod as a ladle for scooping so they don’t have to bend down like a common animal.

The alpha male chimp is called the “silverback” and can be as young as 14. Contending alphas test their strength by banging on trees, and the strongest ones garner attention from the rest of the group. From there, Jonas explained that there are two methods for becoming the alpha. The first being the least common where the current alpha grooms his own son for succession. The second way is more common, and frankly more exciting, involving an individual embarking on a video-game-esque mission of fighting his way to the top, first going for the “assistants”, then fighting the current alpha. Akin to Bruce Lee’s Game of Death, this allows the current alpha to choose whether or not to fight the upcoming alpha, which is a vital decision. The stakes are high, and if the alpha loses he is kicked out of the group and has to stay away, grazing nearby on leftovers and already grazed trees. While many of these aggressive behaviors could be seen as similar to humans, they vary dramatically from those of their other great apes, the mountain gorillas.

If there were ever a success story for international conservation efforts, it would be the mountain gorilla. Since the creation of the park, the mountain gorilla population has gone up from Critically Endangered to Endangered, a tremendous step towards a more sustainable future. It seems that Uganda, Rwanda, and even the Congo know the treasures they have, and are taking the proper precautions to make sure that the gorillas and chimps will have a future for generations to come.

Bwindi Impenetrable Forest was established in 1991, after gorilla conservation leaders like Dian Fossey and Craig Sholley brought international attention to the beautiful species. The efforts paid off—in 1995 there were only roughly 500 gorillas in the world, now we are over 1,000. With a gestation period as long as humans and an average of 2-4 years between babies, the trend is slow, but it’s proof positive that the local and international community as a whole cares about preserving the species. Plus, as the video below proves, they are so damned cute—

In Uganda, the permit for seeing the mountain gorillas has remained $600 for an hour experience, and while other countries have raised their prices, Uganda claims that theirs will not increase. While the Ugandan government is actively buying land for gorillas, they still have many threats. In addition to prized land for mining, the rainforest is very fertile for farming both cash crops for export and domestic crops for internal use.

Gorillas eat frequently, they clash with humans so frequently over crops like corn and sugar cane that the Ugandan government is encouraging people to grow tea, which when used as a buffer surrounding other crops. Surprising to me, the tea leaves act as a deterrent, and their presence discourages animals from walking through them to get to their preferred snacking crops beyond.

Coming Back from Extinction

We saw a lot of unique wildlife through our travels, but couldn’t help but notice that there were some species that were completely underrepresented. Rhinos are in a state of concern throughout Africa, but in Uganda, they are all but extinct in the wild.

This wasn’t always the case. Uganda used to have rhinos, but under the rule of Idi Amin in the 70’s and the civil unrest that followed, they were killed off. It appears the “Butcher of Uganda” stretched well beyond humans.

Currently, the rhinos that exist reside in the Ziwa Rhino and Wildlife Ranch who have been working to breeding them to reintroduce them back into the wild. The park started in 2004 with eight individuals, two imported from Florida, two from Zimbabwe, and four from Kenya. A few years later, a male from Kenya and a female from Florida had a baby and the offspring was named “Obama” in the honor of the nations pairing in the past. While there are many differences between the rhino and the former president, there are also some striking similarities. The Ziwa Rhino and Wildlife Ranch has armed guards, foot patrols, and electric fence stretching the perimeter of the park ensuring that the rhinos are safe and protected from the country’s seemingly omnipresent poachers.

Expanding over 30 square miles, the park now has 22 rhinos and they will be kept there another 15 years until their numbers can grow substantially. These efforts aren’t easy, it takes 400k a year just to run the park, not to mention the cost of the rhino rehabilitation.

Uganda, The Pearl Of Africa

Uganda knows the unique treasures it has, and hopefully, with concerted efforts, can maintain their crown as the Pearl of Africa, and even increase its species populations to those that haven’t called Uganda home for years.

However, as we have seen over and over again, a few bad actors with bad intents can jeopardize the country as a whole. Hopefully, they can keep the trend going, after all, as Jona explained to me mines are finite, the gains from eco-tourism can be infinite.

Tourism can popularize a country before it is ready for it, and therefore ruin a lot, however in the case of Uganda, the country and wildlife rely upon it. The only trick is getting people to come and see the natural beauty for themselves.

A lot of people don’t know much about Uganda, and oftentimes what is known is conjecture or simply false. With that in mind, I made sure to speak with our tour guide and take the opportunity to ask Jona just about all the questions I had amassed since the trip began. We talked about a lot—rhinos, Uganda being safe, Kimberly Endicott (the American who was taken hostage in the spring of 2019), Uganda’s struggles with Ebola, their economic drivers, the depiction of Uganda and Africa in general in the media, and of course his experience with chimps and the country’s overall conservation efforts.