I absolutely love animals, but truth be told I have never liked monkeys. I understand that they can be charming and can even take photos, but I have yet to have found the Abu to my Aladdin. The little guys are agile, toothy, and extremely unpredictable, and can change their opinions of you in a matter of seconds. I have had unfavorable experiences with monkeys on two different continents, proving full-well that these critters do indeed talk amongst themselves and have banded together against me. Trust me, they are evolving, one time I’m pretty sure that I saw one wearing crocs.


My most recent encounter with a monkey was in Kruger National Park in South Africa. We were eating lunch under the trees between excursions and saw that there were monkeys terrorizing other groups for food. We laughed and turned back around to our food and saw a one armed bandit right in front of us. He smiled—I swear he smiled—and grabbed my hardboiled egg with his one arm. Having heard much about alpha males, I decided to not be outdone. I shouted, but depending on who you ask it might have come out more like a scream. The monkey responded appropriately and stood there blinking slowly. I raised the stakes and slammed my chair to scare him away (I had already leapt from it) and he sauntered off, and I am still unconvinced he wasn’t somehow flicking me off with his stub. 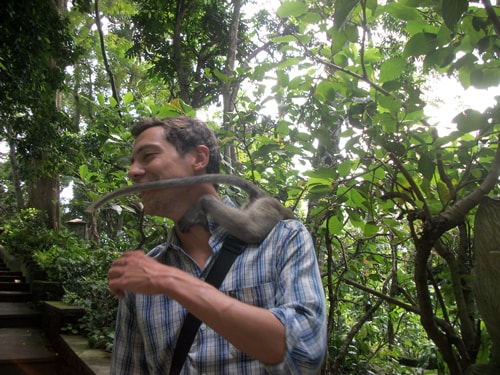 In Ankor Wat, Cambodia, the local monkeys will wait at the top of temple stairs, and if any unsuspecting tourist has a bottle of water in their hands, a backpack potentially full of edible goodies, (which might even include a passport or sunscreen) or if you have even eaten so much as a milk dud in the past 24 hours, you will be picked up by your ankles and shaken violently until all of your pockets are completely empty.

Ok, maybe I am exaggerating, but on a serious note make sure that all items are hidden and oh, they also know how to open backpacks. At the end of the day it looks like—as with most things—we only have ourselves to blame. This surely wouldn’t be an issue if people stopped feeding monkeys and other wild animals. Monkey’s are just like all other animals, and when someone or something gets in the way of food (or any food for that matter) they will lash out.


An update on the one-armed bandit: I recently met with a friend who had been to Kruger National Park just months before I did and he had an encounter with the very same monkey. He’s a ringleader all right, and part of me really respects his gumption.