For a couple that doesn't make a big deal out of most things, our honeymoon was something that we were very focused on making special. We had both grown up idolizing conservationists like Jane Goodall and Dian Fossey, and had always wanted to experience what they did first hand. Furthermore, after speaking to Craig Sholley of the African Wildlife Foundation, we understood that the mountain gorillas populations are the only primate populations that are on the rise, and a lot of that is thanks to the international awareness, money from eco-tourism, and strict policy enforcement.

So last year we got married, and rather than asking for a waffle iron and embroidered hand towels, we decided to set up a honeyfund to help us make our dreams a reality. We started looking into tours and opportunities to tour the area, and came across an 8 day tour to Uganda from Gate 1. The tour included a packed itinerary of game drives, boat cruises, and a loop all around Uganda which culminated in a chimpanzee trek and then a gorilla trek on the penultimate day.

We had traveled to Africa with Gate 1 a few years ago, when we did Gate 1's South Africa Excursion, and knew that we would be in good hands with them, we started planning.

However, on April 2nd, with the kidnapping of Kimberly Endicott, we started to reconsider our honeymoon plans.

We started thinking. It would be much easier, safer, and more relaxed to head to Paris or the Bahamas. We wouldn't have to deal with an 18-hour flight, no concerns about yellow fever, and we would probably have a lot more of an opportunity to relax—we knew what to expect from our trip to South Africa that this trip would be non-stop, and one look at the itinerary I knew we'd be in for quite the ride.

And we weren't the only ones reconsidering going to Uganda. The tour we were looking at was designed for a small group, and initially, 11 people were going to attend, however, in the aftermath of the kidnapping, Gate 1 sent an email offering a partial, and if possible, a full refund to any travelers with cold feet. Five people from our tour alone took them up on the opportunity.

At the same time, they seemed to decrease the prices on future trips. Seizing the opportunity, we immediately booked, knowing that we would be in incredible hands with Gate 1, and we couldn't wait to see the incredible sights that the Pearl of Africa has to offer.

The trip is a 10-day excursion, but since it generally takes a day to get there and back, it clocked in at roughly 8 days, having said that, Gate 1 does a great job of making sure that you have at least a little bit of time on those days.

We were the only couple that booked our flight through Gate 1 and we arrived in Entebbe at around 10 am, allowing us a little time to get to know the area and relax before the trip began. Our travel companions booked separately and arrived later that evening, with one couple coming it at nearly midnight.

From there, we headed to Kibale National Park, where the savanna gave way to dense, thick forest growth. This is home to the world's largest concentration of primates, including baboons, black-and-white colobus monkey, vervet monkey, and, of course, one of the very few places in the world where you can see chimpanzees.

From there we traveled to Queen Elizabeth National Park, where we did game drives, river cruises, and had some of the closest encounters with elephants that we ever had.

Finally, we ended the trip in Bwindi National Park, where, after an extended hike in the jungle, we were luckily enough to see the mountain gorillas, a truly unforgettable experience.

Review of Gate One Travel to Uganda

While I tried to make this review as impartial as possible, it's no secret that I love Gate 1. We knew before embarking on the trip that they would deliver, and they sure did.

Traveling to Uganda was one of the biggest decisions we made, but we knew that is what we'd be getting with Gate 1, an incredibly reliable, affordable, safe, and unique experience.

We were married on October 6th, 2018, and we finally took our honeymoon over a year later, on November 9th, 2019, after much planning, deliberation, and of course, vaccinations.

One of the biggest reasons Gate 1 is so incredible is due to their use of local guides In this case, our guide Jona was absolutely incredible and with us every step of the way, other than the two boat tours.

Jona was the consummate professional and very buttoned-up in an otherwise fly-by-night country. In fact, on more than one occasion he got out of the vehicle to direct traffic and find ways to circumnavigate the accidents. Of all the things to be concerned about, the biggest concern in Uganda was the road conditions. While there, we saw at least three accidents due to road conditions, one actually with an overturned vehicle in Murchison National Park.

We entrusted Gate 1 with the most important trip of our lives, our honeymoon, and we were blown away. I can't stress again how amazing Gate 1 is. 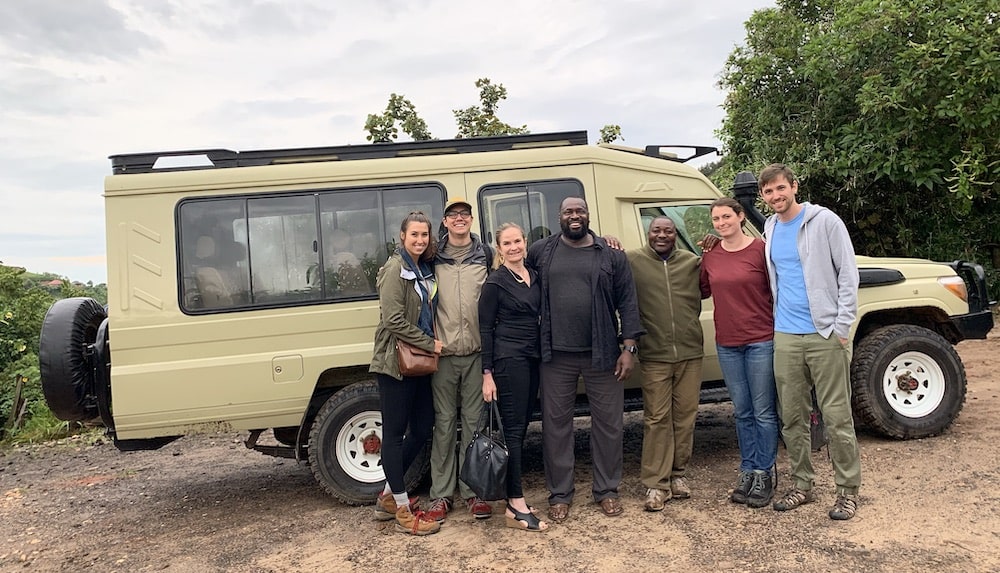 The excursion is expensive, but most dream trips are. We had significant help from our friends and family with the honeyfund, but we still had to save a bit to make it. This is something that we had wanted to do since we were young, and it wouldn't have the same impact if it wasn't such a "considered purchase". Paying the money that we did made us take it more seriously than we might have if it were cheaper, and it also undoubtedly, limits the amount of people who can go. All said and done, we got the trip for $1,500 off, clocking in at just under $5,000 per person.

Luckily, Uganda knows the natural treasures it holds, and a significant portion of the money went to the conservation of gorillas and chimps. After all, the permit for the gorillas alone clocks in at $600 for one hour.

Furthermore, the more I noticed, Gate 1 did a great job of giving our tour guide money in which to tip wait and hotel staff, and even though we tipped on top of that, it's great to know that Gate 1 also takes care of the guesthouse staff as well.

However, the trip was still a stretch financially, and if it weren't for Gate 1's deal, I am not sure if we would have gone to Uganda at all.

Below are quick videos for each of the accommodations we stayed at. Gate 1 impresses me every time, but on this trip in particular, we were very impressed. If you are looking for being pampered, Uganda might not be the place, but for people looking for comfortable and safe accommodations, you are in luck. Gate 1 warned of rolling blackouts, and while we didn't experience that, the last place that we stayed (Chameleon Hill Lodge) only had power from 6:30-10:00 pm, and back on at 5:00 am. While that wasn't usually a big deal, for such an action-packed trip there isn't a lot of opportunities to charge cameras, phones, and other devices. Wi-Fi was pretty ubiquitous but was rarely available in the rooms other than at the Boma guesthouse. While it was generally available in all of the guest house lobbies, it was rarely strong. Quite alright with us, we were trying to disconnect anyways.

All of the guest-houses had beds with mosquito nets, bug spray, and turn-down service, meaning the staff will set up your mosquito net and spray for mosquitos while you were eating dinner.

This was our first guest house, and it did not disappoint, complete with the friendliest pet dog and most curious not-pet monkey. Since we got in early, we were able to have a few drinks, take it in slowly, and really enjoy the honeymoon before the excitement began.

As stated, this was the only guesthouse that had Wi-Fi in the rooms, and it was surprisingly fast. Perfect for connecting with friends and family before the excursion begins.

This guesthouse was incredible. Based right on the Nile, hippo sitings here are common, especially in the evenings after the heat of the day wears off. We stayed here for two nights, and as promised we heard hippos grazing in the grass the second night. Hippos are one of the most dangerous animals in Africa, and claim the most human lives, after mosquitoes. Because of this, we were not allowed to walk around alone after sundown in the event that we stumbled across some and were escorted to and from our rooms.

This lodge deep in the jungle, one night we walked behind a baboon while going to dinner, and the guesthouse staff was telling us that the chimpanzees had been seen in the restaurant restrooms looking at their reflections in the mirror.

This might have been our favorite place. We were perched on a hill overlooking the historic Queen Elizabeth National Park, where elephants and lions, freely roamed. All rooms have two beds, one main one and a smaller one that you can drag out on the private patio. We stayed here for two nights, and since the first one was a bit overcast, we pulled the bed out on the second night and didn't regret the view.

The second night we slept outside, and well, you can see for yourself what that was like.

While this was my least favorite guesthouse, it's location and view was pretty unbeatable (the hero image above was from the porch.) Also, they had incredible coffee which was great after trekking the gorillas.

I felt compelled to add this to the list, as one of the reasons that people don't travel to Uganda is the perception that it's unsafe. While it's true that Uganda has had its share of violent history in the past, currently it is both economically and politically stable. Unfortunately, the same cannot be said for the Democratic Republic of the Congo, a country that is battling political instability, Ebola, and multiple military groups vying for power, and sometimes the entire region is tainted with this reputation.

In my podcast with our tour guide, I made sure to ask him about the kidnapping. Uganda is small, and those in the tourism profession talk frequently, and I had a sneaking suspicion that he knew some information on the kidnapping. As it turns out, Jona personally knew the tour guide that was taken with Endicott, and had first-hand accounts of the endeavor. As Jona explained to me, the kidnappers were all from the Democratic Republic of the Congo and that Uganda has done a great job of sealing their borders since the incident. The DRC is a very poor country, and the kidnappers came over to Uganda strictly for financial gain, with no intention of ever harming Kimberly or her guide. While that is difficult to keep in mind, and certainly doesn't justify the absolute terror that the hostages were in, it's an important distinction to note, and we're all more valuable alive than we are dead.

The trip was absolutely incredible. Although I wouldn't recommend it to everyone, I can safely say that anyone interested in seeing the mountain gorillas or the chimpanzees, and are ok rolling with the punches will thoroughly enjoy this trip.

There was a lot of time in the vehicle, and one day drove for 6 hours total but, we got to see a lot of Uganda, and from a really interesting perspective. I heard that the following year a flight will most likely replace a lot of the driving, but I was content with driving and seeing as much as Uganda as we did.

The bottom line is Uganda was incredible, but I am not sure if it is for everyone. We entrusted Gate 1 with the most important trip of our lives, our honeymoon, and we were absolutely blown away.