We talked late into the night, the California sun had long set behind her. We were connecting via Skype and were starting to wrap up, but Stefanie Brendl was captivating me about her experiences diving with sharks, shark population trends, and of course, shark finning. I was enthralled.

Stefanie has a story to tell. She has dived with multiple species of sharks all over the world, and, although she will most likely deny it or pass to credit others, Stefanie was almost singlehandedly responsible for stopping the possession, sale, and trade of shark fins in Hawaii along with Hawaiian State Senator Clayton Hee. 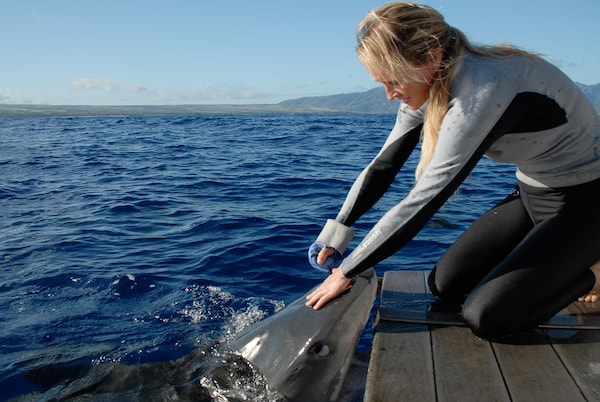 Born in Germany, Stephanie quickly found her way to the ocean and practically never left. She has been diving with sharks for over 20 years, traveling and working as an underwater photographer and videographer. Her work has taken her to remote places in the world, and has been featured in many magazines, television shows, and most recently in a documentary "Extinction Soup". She then settled in Hawaii to establish Hawaiian Shark Encounters, a tour group that allows her customers to get up close and personal with sharks.

After years of diving with sharks, Stefanie felt a need to help in a more direct manner and decided to leave the water to help shark populations through policy.

"It was time to get out of the water and actually help sharks in a real, meaningful way."

"It was time to get out of the water and actually help sharks in a real, meaningful way." And, anyone who understands the current situation sharks are in know there is a lot of work to be done. Their numbers are plummeting, and due to difficulties patrolling and tracking fishing in international waters, there are little signs of the population decline slowing.

Stefanie and her team work full-time with her non-profit Shark Allies, an organization that is working hard to improve the public perception of sharks and ultimately ban the Florida shark fin trade. Currently, Stefanie splits her time between her home in California and working in Florida, her base of operations, and one of the last strongholds for the trade of shark fins in the United States. 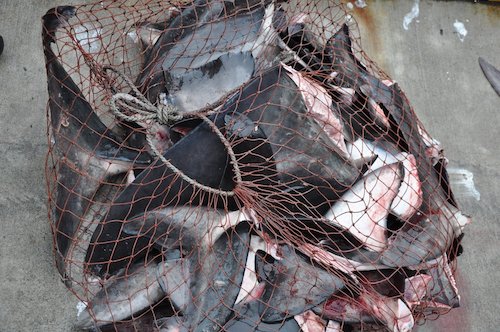 Shark finning, a purely barbaric process, is the act of cutting the fins off of sharks while they are still alive. Since the rest of the shark is much less valued than the fins, the living shark is then thrown overboard so that it sinks to the bottom and dies a truly miserable death either by drowning, being eaten alive by other predators, or most likely both. Without the body of the shark, fishing boats have more room and are carrying less weight, and thus can then stay out longer, allowing themselves to oftentimes pull in hundreds of thousands of fins on one haul. As Stefanie points out, it's rare for fishing vessels to make their entire income off of shark fins alone, but fishing is a difficult profession, and the temptation to supplement income with shark fins is not easy to ignore.

Due to the difficulties of tracking international fishing boats, and the virtual impossibility of analyzing unreported and illegal fishing, it is incredibly difficult to determine exactly how many sharks are killed per year, and even to know how many are left, but it is predicted that shark finning claims anywhere between 25 million and 268 million sharks annually. While some of the larger numbers are based on extrapolation, Stefanie believes that even the lower numbers are wholly unsustainable, and unfortunately, the shark fin trade is showing no signs of slowing down.

What Are Shark Fins Used In?

Shark fins are primarily used in shark fin soup, a dish that is often served in China and Vietnam for celebrations like weddings, anniversaries, and retirement parties. Because of the growing middle class in China in particular, demand for the dish has exploded, and customers are paying top dollar so that it is served at their next event.

Shark fin is absolutely tasteless and provides zero nutritional benefits, however, it remains a cultural staple in some Eastern dishes. Shark byproducts can also be found in anything from Omega 3 pills to beauty products, and due to some shrewd marketing practices, some people even incorrectly believe that shark cartilage helps with cancer. Unfortunately, there are many beauty and household products that are made from sharks and are being hawked to unsuspecting consumers on a daily basis. During our talk, Stefanie informed me to avoid shark squaline, which is commonly found in skincare products like lipstick, and shark cartilage, which can be found in supplements. There are alternatives for each product, and Stefanie points out that olives can produce the same emulsifying effects as squaline without having to expend sharks. But still, sharks are being killed.

At the rate sharks are being killed, Stefanie predicts we have about 5 years to try to save them before they are gone completely.

Florida: The Last Stand In The Shark Fin Trade

While the Shark Finning Prohibition Act of 2000 (SFPA), banned "finning on any fishing vessel within United States territorial waters and on all U.S.-flagged fishing vessels in international waters", each state is responsible for their laws and enforcement as to what to do with the sale and trade of shark fins.

Florida, as Stefanie puts it, is the last real stronghold for the shark fin trade. Since the documentary, California, Oregon, Washington state and Texas have joined Hawaii making the trade of shark fins illegal, so the Pacific and the Gulf of Mexico are primarily covered, but since the trade of shark fins remains legal in Florida, a large part of the Atlantic ocean coastline is left open to bad actors. Furthermore, Florida's proximity to Costa Rica complicates the matter, as the country has been losing the battle of shark conservation for many years.

Shark Finning By The Numbers

The Battle to Save Sharks

Unfortunately, shark's "ferocious" reputation has preceded them, a plight that Stefanie knows too well. Of all the funds that go to helping the environment, only a small fraction go to helping the oceans, and of that percentage, an infinitesimally smaller percentage goes to helping sharks. To combat this, Stefanie has created the Hollywood Sharks campaign in an effort to base Hollywood's portrayal of sharks off respect rather than fear. While it will most certainly be an uphill battle to completely reverse the public perception of sharks held by a critical mass of people, shark awareness and advocacy are the first step to protecting such a crucial cornerstone species.

Sharks have evolved over millions of years to perfectly fill the role they play in the ecosystem. Since smaller fish evolve to be prey, they tend to reproduce in large numbers to make up for the fact that many of them will be hunted. On the other hand, sharks have a longer gestation period, and only give birth every few years to relatively small litters. On top of that, sharks aren't sexually active until they are deep into their teenage years. They are apex predators, and because of that, their numbers aren't needed to be as large as those of the prey. Put simply, sharks haven't evolved to be hunted in such numbers, and their populations cannot sustain the wasteful practice of shark finning.

Because the two are inextricably linked, losing an apex predator such as sharks will have a terrible impact on ocean health. Everyone in the world is dependant on healthy oceans, and we simply can’t risk them collapsing. Loss of sharks will not only mean the rise of other fish species, but it also will result in a rise of weaker and sick fish. Without sharks keeping the populations in check, these fish would be allowed to reproduce and pass along their weaker traits, theoretically weakening the entire species and threatening the entire food chain.

“Like them or not, the ocean needs sharks, and we need the ocean.” — Stefanie Brendl

Truthfully, it is impossible to predict the repercussions of a world without sharks, but one thing we do know is once they are gone, there is no going back. There is no way to fabricate or fake the role that sharks have played in the oceans for millions of years, and the oceans are far too vulnerable and important to take the risk.

In our interview, Stefanie and I speak about her up-close experiences diving with sharks, the unfair depiction of sharks in the media, and shark finning trends and potential solutions. You can follow Stefanie and SharkAllies on Facebook, Instagram, and Twitter.