Overfishing Our Oceans: A Real Possibility

The prospect of an overfished ocean is a truly scary thing; what we once thought were an inexhaustible resource has fallen to overconsumption and greed. The oceans are being abused, and everything from sharks, to tuna to humans will feel it. Just looking at the stats, at the rate we are going we may only know the massive effects of overfishing practices until after it’s too late. 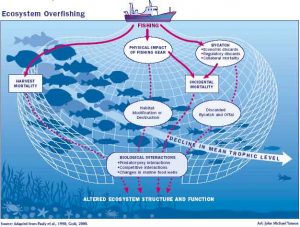 We’re not talking about the occasional hobbyist taking a pole to the pier or even a deep sea fishing charter. The real issue of overfishing is the use of unsustainable practices like drift nets and long-lines consisting of up to a thousand hooks. Commercial fisheries will cast out either a net or line in the hopes of catching a certain type of fish. While these practices are phenomenal at catching the target species they also can snag just about all marine life without discrimination. Called bycatch, these unwanted animals can include females and juveniles, not to mention species like dolphins, turtles, and sharks. The fishing boats will wait for hours, sometimes days before pulling in the catch. By this time their nets and lines are full and most of the unintended catch is dead only to be thrown overboard. Some reports find that bycatch equals to about 63 billion pounds of wasted food per year. 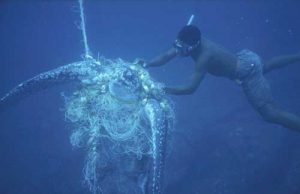 Although long lines and drift nets round up a large amount of bycatch, they are in fact legal. Believe it or not, there are actually more unsustainable fishing methods out there, including bottom trawling (where the net scrapes the bottom of the ocean destroying fish habitats and coral), blast (dynamite) fishing, and cyanide fishing. Unfortunately, illegal, unreported, and unregulated (IUU) fishing practices consist of 14-33 percent of the fishing market today.

What Is Being Done About IUU Fishing?

Leonardo DiCaprio is well known for his conservation efforts, but recently he has stepped up his game. Teaming with Google, Oceana, and Skytruth, Leo unveiled the newest iteration of a global heat map application depicting the locations of large fishing efforts from multiple companies and countries. The Oscar-winning actor donated over half of the budget for the 10.3 million dollar project, stating humans “are … pushing our oceans to the very brink,” and “treating our oceans as an endless resource and a dumping ground for our waste.” Called Global Fishing Watch, the technology allows for anyone in the world to see the oceans fishing activity in real time, putting power in the hands of the general public to combat unsustainable fisheries.

Is Farmed Fishing The Answer?

The granddaddy of animal domestication Francis Galton knew a thing or two about animal husbandry. In his 88 years, he was an accomplished statistician, anthropologist, sociologist, psychologist, explorer, geographer, inventor, proto-geneticist, psychometrician, meteorologist, and eugenicist. He published roughly 350 articles and books. He coined the phrase “nature versus nurture”. He was even knighted a few years before he died. Galton had some very simple criteria that he saw were required for the success of the domestication of animals.


2) Endowed with an inborn liking of man:


5) Needful of only a minimal amount of tending:

All this research makes sense when we consider that Galton is Charles Darwin’s half-cousin.


In chef Dan Barber’s TED talk from six years ago he addressed ocean sustainability announcing that “it’s hard to overstate the destruction”. He goes on to explain that in theory, farm-raised fish could be the easy solution.


However, aquaculture is not without its drawbacks. The large concentration of fish pollutes the surrounding areas which pose a huge issue when close to drinking water sources. However, in order to farm bigger fish like tuna and sea bass, they must be fed hundreds or even thousands of pounds of bait fish like sardines and smelt, which are of course caught from the sea. Tuna are warm blooded and quick, agile swimmers and require a lot of food to maintain their active lifestyles needing an average feed conversion ratio (FCR) is 15-20lbs of wild fish to create 1 lb of tuna meat, making the entire process remarkably counter-productive. Compare that to salmon with an FCR of 3, and tilapia who have an FCR of 1.5 and can thrive off a purely vegetarian diet. Tilapia is so efficient that it is often used as a low-cost, high protein for fish farmers in developing countries. In fact, it is so useful that the Peace Corps regularly set up tilapia hatcheries in countries in which they serve.
In the exhaustively researched book Four Fish, author Paul Greenberg explains the future of wild fish and the possibility of farming them. He then proposes two lists of how to handle wild fish and farmed fish.


Enter Spanish Biologist Miguel Medialdea and his farm Veta La Palma. As perhaps one of the few sustainable aquaculture farms in the world, Miguel proves that farming fish is not only possible but can also enhance the surrounding environment. His farm is sourced by nutrient rich soil and water which with the ample sunlight create algae. This alga is eaten by shrimp, which is eaten by the fish. Sounds familiar? Yeah, it’s a process that has been around for millions of years, talk about sustainable.