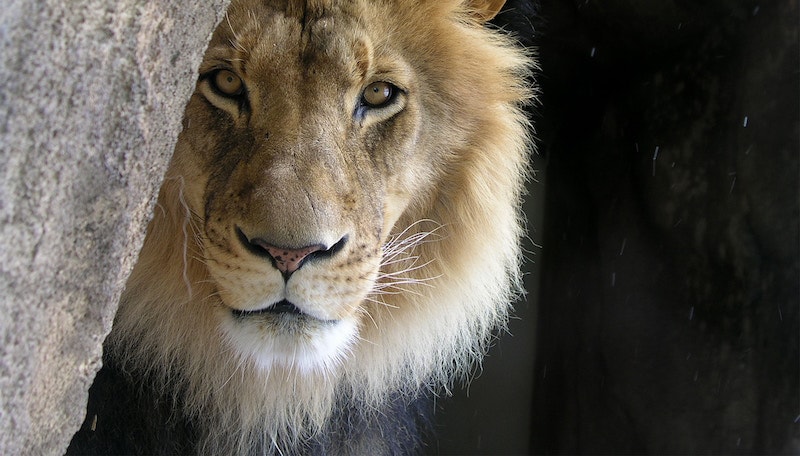 With sharply plummeting rhino populations, a decrease of one-third of total elephants in less than a decade (and many of those numbers from protected areas) and less than 20,000 lions left in the wild, African wildlife has recently found itself in unprecedented peril.

But luckily turning things around should be a piece of cake. We just need to stop the terrorism-supported trade of ivory, provide enough protein-rich food to locals so they no longer have to turn to bushmeat, and subvert illegal trade over the dark web, right? Well, not quite.

Of course, this happens…

On November 14th, 2017, the US Fish and Wildlife Service announced that it would start to allow hunters to bring back their trophies of elephants and lions from Zambia and Zimbabwe, claiming that the funds and fees associated with hunting the big game would help with conservation efforts in those areas.

The idea to reverse a 2014 ban enacted by Obama was announced by U.S. Secretary of the Interior Ryan Zinke, who has dangerously strong ties to Safari Club International, the group that has lobbied hard for gun rights and hunting advocacy. This clear conflict of interest is especially apparent when you take into account that SCI donated a total of $13,500 to Zinke’s congressional campaigns in 2014 and 2016, as uncovered by environmental reporter Chris D’Angelo.

💰 @SafariClubIntl—the hunting group that in 2014 sued to block Obama-era ban on importing 🐘🏆 and this week announced/cheered Trump admin’s reversal (now on hold)—donated big to both @realDonaldTrump & @RyanZinke. Totals from Safari PACs:
To Trump: $11,000
To Zinke: $13,500 pic.twitter.com/loLw9w52NE

The reversal was lauded by pro-gun and hunting advocacy groups, so much so that Chris Cox, the executive director of the NRA’s Institute for Legislative Action called the initial decision “a significant step forward in having hunting receive the recognition it deserves as a tool of sound wildlife management, which had been all but buried in the previous administration”. Which leads us to our next question…

Trophy hunting is a complex and emotional subject which few understand in its entirety, and it’s a bit myopic to wholly condemn it without first reviewing all the facts. On a guy level, we find it reprehensible, but does it help with animal conservation?

Hunters traveling to Africa claim that the price tag of their excursion, often totaling over $50,000, goes entirely to conservation efforts. But with a decision that was shrouded in secrecy with little transparency regarding the flow of funds, trusting the process is a chance that is too risky to take. Few can argue that more money wouldn’t help conservation efforts, but with such little oversight, there is no guarantee that the money will end up in the right place. Furthermore, there have been reports of ivory poachers already exploiting the system by pretending to be “legitimate” trophy hunters, proving that it still is a far cry from being perfect.

The practice provides 70,000 jobs and bringing in nearly $800 million annually in South Africa alone, and with America’s own checkered past of extremely irresponsible over-hunting, it’s hard to argue with a developing country that it can’t responsibly manage it’s own wildlife populations in efforts to protect the survival of its species as a whole.

It’s often easy to forget these are wild animals, and though we see them as majestic and beautiful through photos and safe, short-term Safari trips, they are more often a danger and a nuisance to locals in the area. In unforgiving locations prone to drought and scarce of resources, there are very small margins of error, and animals and people are often at odds. Herds of animals can often be competition for food or water, farmers have to constantly defend their crops from elephants, and lions are a near constant threat to livestock and children. In fact, after Cecil was killed, a grad student from Zimbabwe made it very clear that where he comes from they cheer rather than mourn the death of a lion. With all this in mind, it can be easier to understand why Africans might consider trophy hunting to turn an environmental danger into a money-making effort.

So, even Trump, in his infinite wisdom, vacillated on the decision set forth by his own cabinet.

Put big game trophy decision on hold until such time as I review all conservation facts. Under study for years. Will update soon with Secretary Zinke. Thank you!

Why? Why did someone as stubborn as Trump change the stance of his administration? Did he realize that the ivory trade is inextricably linked to terrorism? Did he take the moral high ground above the Safari Club and the NRA’s pleas for less strict hunting? It’s tough to say, but taking a quick look at his Twitter feed, something tells us that the impressionable president caved under pressure…

Even uber-conservative Michael Savage took to Twitter to urge Trump that the lift of the ban was a terrible idea, going as far as to take full credit for the commander in chief’s opinion reversal.

Apparently Michael Savage has since deleted his Tweet, but we swear it was there at one point!
It truly seems that Trump folded like a cheap suit to pressure from conservative pundits that he so admires, but regardless of the reason, we’ll take this rare opportunity to say “thank you, Mr. President”.

Officially, Trump is making the decision on the ban sometime this week, which is good since he seemed to gain some composure on the issue and called it a “horror show” in a tweet just a few days after his initial statement. But, as with all things Trump, he chooses to leave us in suspense until next episode.

Big-game trophy decision will be announced next week but will be very hard pressed to change my mind that this horror show in any way helps conservation of Elephants or any other animal. 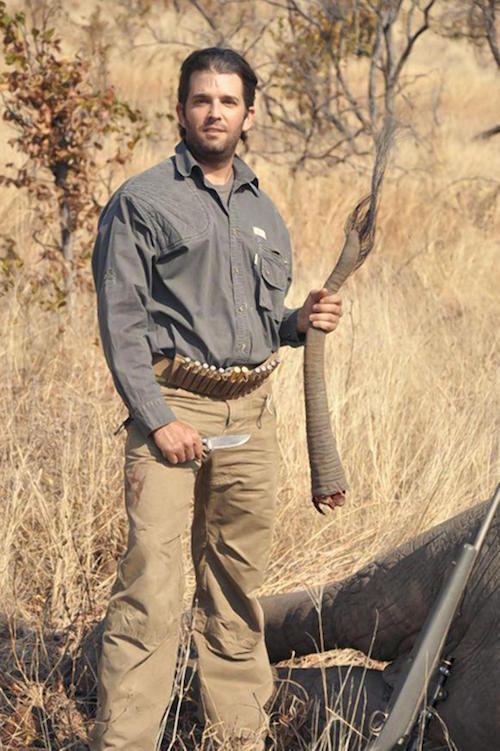 Trouble With Trophies (and no, we’re not talking Melania)

It’s no secret that Trump’s sons are big hunters, but it’s something both Trump and Ivana have publicly disavowed.

In her own book, Raising Trump, Ivana wrote—

“I don’t object to their going to Patagonia to shoot birds. There are a million of them there, enough to spare, But why go to Zimbabwe to shoot Bambi and Dumbo? I don’t blame people for giving them a hard time about it.”

Trump himself has publicly disapproved of his son’s hunting hobby, taking to Twitter to explain his case even before his presidency.

@cher Old story, one of which I publicly disapproved. My sons love hunting, I don’t.

Every year, 30,000 elephants die due to poaching (populations are decreasing at a rate of 7-10% annually) and lions are now extinct in 7 African countries (with populations dropping 40% in the last three decades). Trophy hunting is certainly not of the biggest threats to beloved animal species, where habitat loss, bushmeat, and rampant poaching for ivory taking the cake for the sharp declines. But unregulated hunting in colonial Africa is a large part of how we got in this situation in the first place, and that’s a hard lesson to forget.

Trophy hunting is a highly polarizing issue, with both sides claiming that they are doing the best for the conservation of the species (controlled and regulated hunting efforts have a proven record of helping some species recover from vulnerable population levels). But considering the intelligence and emotion of elephants and the majesty and beauty of lions, it’s difficult to remove emotion from the topic.

As of late, things have been looking up for elephants and lions, so now is the perfect time to stop this reprehensible act. In China, the biggest consumer of ivory, demand for the substance has dropped dramatically. At the beginning of this year, the world’s biggest ivory market closed. Japanese online retailer Rakuten agreed to stop selling and shipping ivory. And, considering the backlash towards Kendall Jones and Walter Palmer, the Minnesota dentist who show Cecil the lion in 2015, it is clear that the general public is pulling for the welfare of African wildlife. If these positive trends continue, we might see a world where these majestic creatures are no longer in need of our protection and will return to their rightful places as kings of the jungle and gentile giants of the plains. And remember, like always, there is something you can do to help.