Humans often have a history of conquering what we find scary in some seemingly perverse way of proving ourselves. However, in the midst of some recent incredibly cruel actions towards other predators, shark finning might very well be the worst. Shark numbers are dwindling fast, and in order to keep these beautiful creatures alive, we need to figure out how can we stop shark finning.

What Is Shark Finning?

The figures are staggering, but also somehow ignored. Reports of up to one hundred million sharks are brutally killed each year in a process known as finning. Making up just 3% of their body weight, the shark’s fins are cut off and the rest of the body is discarded while it’s still alive. Sinking helplessly to the ocean floor, the sharks then die from suffocation, starvation, or slowly being eaten alive by other predators. No shark is safe from this treatment, as those who are hunting these creatures have no concern for its age, species, or size. While the villainizing of sharks has been challenged time and time again, people can still fail to realize that with practices like finning and the use of long lines (long fishing lines that can include thousands of hooks), we are the real dangerous ones. At the rate in which we are going, sharks could be extinct in the next few decades.

Why Are Sharks Important?

So we could lose a lot of sharks, what’s the big deal? A quick reminder of the food chain should correct any of this thinking. As important as all animals are to the ecosystem in which they live, apex predators perhaps hold the most weight. The term “apex predators” refers to predators that are dominant in their position at the top of the food chain, and ultimately keep all other species in check. Hand in hand with the decrease of such a marine dominant predator such as sharks, we’ll see an increase of medium-sized fish that sharks once preyed upon. With more medium-sized fish trying to survive, there will be less smaller fish and thus a potentially unhealthy amount of algae in the oceans.

Additionally, with no sharks, there will be more turtles and rays to eat coral, scallops, mussels, and clams. As these shellfish decline in numbers, so will the creatures which rely on them for food. Divers will also suffer; overfishing practices have all but decimated sharks and large fish sightings in and around coral reefs. 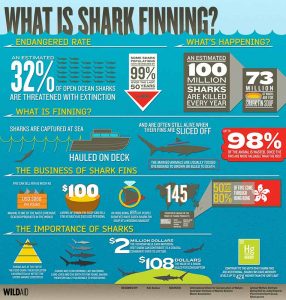 Similar to elephants, dolphins, and humans, sharks are k-selection species meaning they grow slower, reach sexual maturity later, and have less intercourse than most other animals (just think high school). Sharks have very few young, and with some species taking over 25 years to reach sexual maturity, their populations are struggling to keep up with finning and unsustainable fishing practices. Simply put, sharks are being killed at a rate too quick for them to bounce back. This imbalance could send the entire oceans into a downward spiral where they very well may not be able to recover. There is no telling what or if our oceans would survive this change.

We don’t have an exact number on how many sharks there are in the wild which make it difficult to pinpoint how many are left but scientists predict that we have cut numbers from anywhere to 90-99%. Sharks have been around for 400 million years, 150 million years longer than the dinosaurs. For most of that time sharks controlled the oceans, and had very little predators. However, if we aren’t careful we could very well hunt them to extinction once and for all.

What Is Being Done About Shark Finning?

Due to sharks naturally expansive migratory patterns, they are very difficult to both analyze and protect. Because of this, exact numbers will vary depending on what source you use, but the trends are clearly declining, and many species are teetering between vulnerable and endangered.

In 2013, CITEs declared Oceanic White Tip, Atlantic Porbeagle and three species of Hammerhead Sharks as “vulnerable”, while the Great Hammerhead, Scalloped Hammerhead, and gentle giants whale sharks, are endangered. Even the mighty Great White Shark is listed as vulnerable. However, with data decades old, and the popularity of shark finning only on the rise, it stands to reason that the circumstances are much more dire at this time.

Making the issue even more slippery, once the fins are separated from the shark and they are dried, it’s very difficult to determine whether it’s a protected species. In June of 2016, Congress introduced legislation to ban shark finning in the United States, and individual states are falling in line, but that might not be enough. With the bulk of the consumption of sharks occurring outside of the US and offshore fishing virtually impossible to regulate, it’s necessary to ban the cruel practice completely.

Costa Rica, one of the last sanctuaries for sharks, is losing ground due to corruption and weak legal regulations and enforcement. While shark finning is technically illegal in Costa Rica, the practice has many loopholes, perhaps by design. Shark finning is allowed as long as the fins are removed on land, and until recently, foreign ships were allowed to shark fin in Costa Rican waters with impunity. With this in mind, it should serve as no surprise that Costa Rica has a strong relationship with China, the world’s leading consumer of shark fin soup. In 2011, China built a $105 million dollar soccer stadium in Costa Rica, claiming that the Estadio Nacional was just a donation, however, just two weeks after the stadium was opened, China and Costa Rica signed an extensive free trade agreement. Now, the country with the largest population of sharks and the country with the most demand for shark fins are permitted to trade without restrictions.

How Can We Stop Shark Finning?

Say No To Shark Fin Soup: Sharks are finned exclusively to make shark fin soup, a meal that no nutritional value and very little taste. On top of that, due to their diets, sharks are also dangerously high in mercury levels. It’s clear that it’s best to avoid eating sharks for our own health as well as the health of the planet. If you are serious about helping to save sharks, the best way to do so is to avoid all places that serve shark fin soup. As with avoiding buying ivory from both rhinos and elephants, we know that we can wield a lot of power in our purchase decisions.

Donate: Organizations like SharkSavers, SeaShepherd, and Oceana are fighting everyday to improve the chances of shark survival, and your donations will go a long way in helping them win.

Dive with sharks: First make sure it is a sustainable
Dive with sharks, either internationally or within the United States. Anyone who has encountered them could speak about their extensively about their grace, beauty, and power.