This article was updated September 19th, 2017


The rainforests are the lungs of the earth, provide food to many people, and are an amazing ecosystem for some of the world’s most beautiful flora and fauna. With that in mind, there’s little doubt that the effects of rainforest deforestation would be devastating to both people and the environment, but with about 75 million acres cut down each year, we might not have long to act.

Why are the rainforests being cut down?

It’s common knowledge that the rainforests are being cut down at an alarming rate for things from cheap timber, rubber, paper, pulp, and to make land for cattle and farming. However, many people are unfamiliar with the rising use of conflict palm oil, which recently exploded as ingredient substitute after the FDA banned trans-fat. 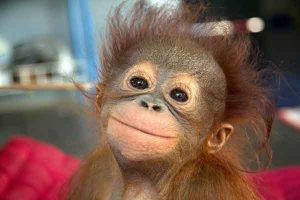 Cheap and versatile, palm oil is used in about 50% of prepackaged snack foods, soaps, shampoos, lipsticks and other common items. Palm crops thrive in hot climates with peatland soil, putting the rainforests of Indonesia and Malaysia in danger of being exploited for their perfect growing conditions.


Indonesian and Malaysian rainforests are being depleted faster than any others, so much so that Indonesia has now become the third largest contributor of carbon emissions globally, just behind America and China. If we lose the rainforests in Sumatra and Borneo we will also say goodbye to distinct animals like sun bears, Sumatran rhinos, and orangutans, forever.


It’s important to note that palm oil itself isn’t all bad. Palm oil is more land-efficient than other options like soybean oil or coconut oil. It’s production doesn’t require many pesticides or fertilizers, which the bees no doubt appreciate. It’s a huge export for an otherwise poor region, accounting for roughly 10% of Indonesia’s total export earnings. However, the unsustainable palm oil industry is mired with reports of rainforest deforestation and human rights issues. Such a mismanaged industry should be boycotted until it has it’s act together.

What companies are cutting down the rainforests?

Clearing new land for palm oil brings more carbon dioxide into the environment, destroys rainforests and animals who live in it, and impacts the livelihood of those who depend on the forests for their food and way of life. So, who could be so shortsighted to only think about quick money? Who is responsible for turning these lush, fertile habitats into uninhabited waste?


In short, many food corporations think they can get away with using palm oil in their products and are complicit in the destruction of the rainforests. Popular brands like Hershey’s, Campbell’s, Nestlé, PepsiCo, Kellogg’s, and more are part of the The Snack Food 20 and are contributing to the destruction of the rainforests through their selfish and reckless practices. Interestingly enough, there are alternatives to palm oil, but with the currently rapid pace of deforestation, it is apparent that things may get worse before they get better.

A little hope from a strange place

However, good news can come from the strangest places. Just days after taking office, Trump signed an executive order that withdrew America from the Trans-Pacific Partnership Agreement, and in doing so, might have unwittingly delt a huge blow to the palm oil industry. The TPPA was initially intended to lower tarrifs and barriers to trade for 12 countries, including Australia, Brunei, Canada, Chile, Japan, Malaysia, Mexico, New Zealand, Peru, Singapore, Vietnam, and, until 23 January 2017, the United States.


With the departure of the US and it’s 350 million cunsumers, the Malaysian crude palm oil industry would surely suffer. While some countries believe that the entire agreement might have to be rewritten, Japanese Prime Minister Shinzo Abe has said that the TPP without the US would be “meaningless”.

What can you do to help the rainforest?

Luckily, Europe is set to move to 100% sustainable palm oil by 2020. Still, we’re going to need more to take down this billion dollar industry. Remember, ultimately consumers have the final say over what is in their products.


1) Buyer beware: When you are in the supermarket or buying clothes or beauty products, make sure that your choices are palm oil free. Your wise buying choices send a message to corporations that you will not stand for conflict palm oil and deforestation.


2) Join the team: Tell the corporations that you are part of the Palm Oil Action team and make sure to sign petitions that show corporations we expect them to be conflict palm oil free. We need to act now before the palm oil industry expands to other countries and affects more indigenous people and animals.


3) Spread the news: Share the issue with friends and family on social media. After all, the solution is #InYourPalm. If enough of us speak out and stop buying conflict palm oil products we can stop companies like Nestle from destroying rainforests.

“You [consumers] are really important in helping us get to a world where sustainable palm oil is the norm and that it is unacceptable to produce palm oil in a way that damages the environment, and the health of the people working and living in palm oil producing areas.” —Dr Emma Keller, WWF

4: Travel (or donate): Google, partnering with Lenovo and the World Wide Fund (WWF), is making it possible for you to visit the rainforest, at least via your phone. The “Into the wild” Augmented Reality exhibit allows you to walk through the ever-shrinking Rimbang Baling rainforest in Sumatra, Indonesia. While there, you can spot orangutans, tapirs, and even the Sumatran tiger, which are all critically endangered species. But the exhibit steps into real life as well—for every virtual tree and donation, an actual tree will be planted in the Rimbang Baling rainforest.
When we all work together, we can verify that there is still hope for the environment.

What would the world look like without the rainforests? Seeker media plays out the scenario of a world without rainforests, stating that without them, humans would be without the basis of many prescription medications, and would suffer from faster and more intense climate change.

Update:
Giving credit where it’s due, Abercrombie & Fitch agreed to use remove materials from their clothing that contributed to deforestation. Nice job, Rainforest Action Network.