800 billion tons, that’s all we have left in our global carbon budget. At our current rate of 35 billion tons (or gigatons) a year, we are set to hit that in just over 22 years. This budget, allotted by the Intergovernmental Panel on Climate Change, is meant to prevent our planet from warming to the “dangerous” levels of 2 degrees Celsius (3.6 degrees Fahrenheit) of pre-Industrial Revolution levels. What happens if we hit this threshold? Worst-case climate change predictions vary a bit, but none are good.

The Climate Change Highwire: Why 2 Degrees?

Here you’ll get a few different opinions, but it mainly comes down the increase of climate induced storms, floods, and droughts. In addition to directly threatening the lives of those who live in low-lying areas and places susceptible to deadly storms, rising temperatures and more prevalent floods and droughts will make growing crops and raising livestock increasingly difficult if not impossible in many areas that currently do just that. That means food production will nosedive in a world where population is skyrocketing. Simply put, the effects will be undeniable, and will no doubt get the attention of those who have ignored climate change in the past.

A Threat To Our National Security

“Among the future trends that will impact our national security is climate change. Rising global temperatures, changing precipitation patterns, climbing sea levels, and more extreme weather events will intensify the challenges of global instability, hunger, poverty, and conflict. By taking a proactive, flexible approach to assessment, analysis, and adaptation, the Defense Department will keep pace with a changing climate, minimize its impacts on our missions, and continue to protect our national security”.

That’s right, our own DoD labeled climate change a threat to our national security. Unfortunately even though climate change was acknowledged carbon was not addressed, leaving us far from a consensus in the US government about the causes and even existence of man-made climate change.

A naturally occurring compound, much of carbon dioxide is absorbed by the forests and oceans. Plants take it in and create oxygen and the oceans can take up to 25% of it into their cycles. Problem is, there are less trees now than ever, and the ocean’s healing power is becoming exhausted. The facts remain that the majority of climatologists, meteorologists, and earth scientists agree carbon dioxide has a pretty inextricable relationship with the earth’s temperatures. As seen in the graph below, other than a few years, as the carbon in the atmosphere increases so do the average temperatures. 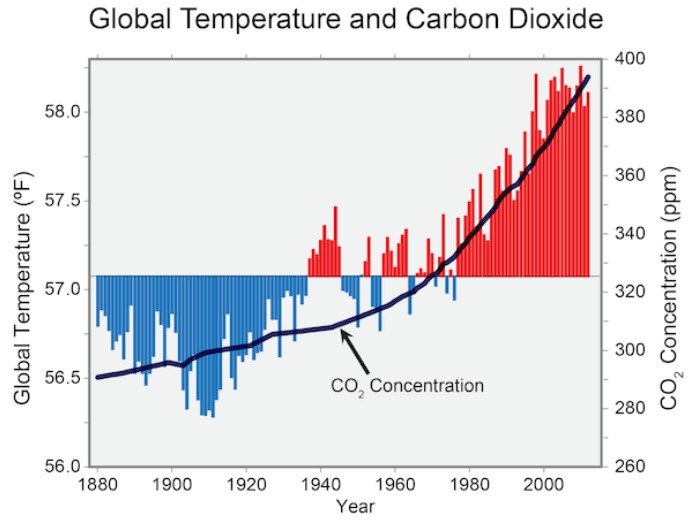 This looks like a trend if I’ve ever seen one. Image courtesy of Karl et al. 2009

Well, that’s great. Is There Any Risk Of Going Over 2 Degrees?

Although 2 degrees has been pretty universally agreed upon as being catastrophic, there is a chance that we could actually overshoot it. The biggest issue with climate change is the worse it gets, the quicker the issues will begin to add up. As white arctic ice melts and is replaced with darker water it will begin to absorb the heat it once reflected. As northern permafrost melts it will release dangerous methane into the air, a compound even more efficient than carbon at insulating warm temperatures. As trees are being cut for cattle, CO2 is spewed into the air while simultaneously creating more room for cattle, another perpetrator of dangerous methane emissions.

Don’t Leave Depressed, Here’s What You Can Do

With the recent US presidential election and cabinet selections threatening to set progress drastically back, it appears that we have to take matters into our own hands to set the next 22 years straight again. It’s a zero sum game, every bit helps. Every time you use less energy around the house, bike to work, eat less meat, reduce your overall consumption and recycle as much as you can, you are helping to save the planet for future generations. The EPA itself provides a great list (at least for the time being)* of things that you can do at home, at work, and on the go which will provide huge strides in the fight against climate change. Finally, if you want daily news and inspiration, remember to follow us on Twitter, and bear in mind there is no shortage of other climate change enthusiasts and experts as well. 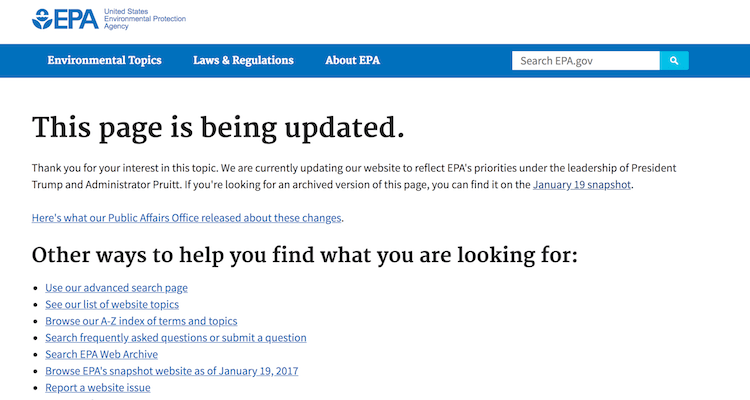 *As of March 2017 this link was removed from the EPA site. It is now linked to the snapshot of what the page once was