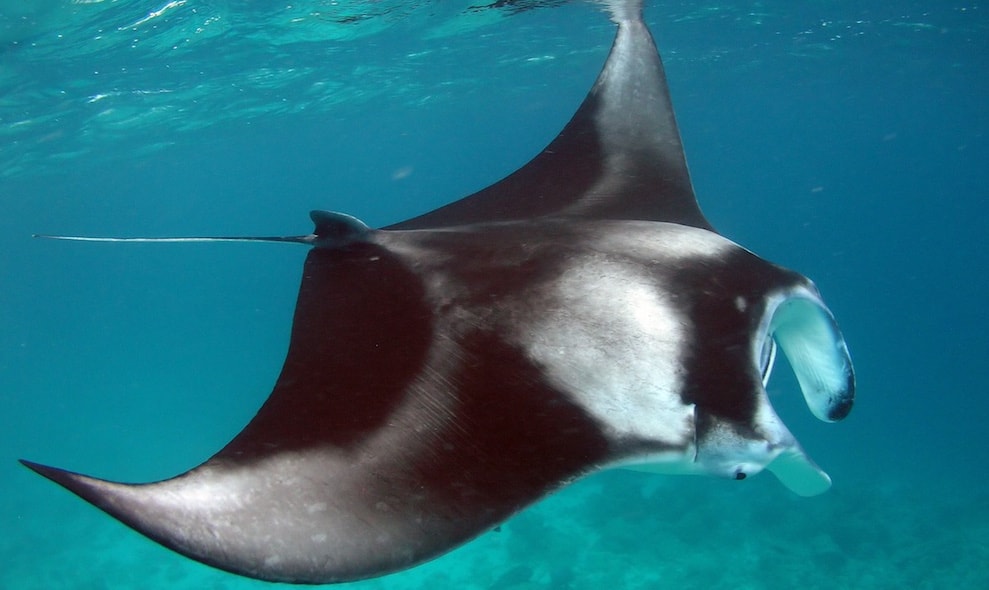 Game show question time—what is the fish with the biggest brain? You’d be forgiven if you thought that it sharks because of their age, or whale sharks based on their sheer size, but in fact, manta rays have the highest brain weight to body weight, ratio, bigger than most bony fishes, birds and even mammals. Ok, you probably already guessed mantas based on this article title, but hang on for the lightning round.

The term “manta” means “cloak” or “blanket” in Spanish, and as their name suggests, they are quite shrouded in mystery. Mantas are notoriously difficult to study, but once spotted, they actually don’t shy away from humans.
Mantas are pelagic meaning that they live in the middle of the ocean and neither too close to the shore or the sea floor.

Rays are essentially flattened sharks, but surprisingly mantas feed on zooplankton and it’s quite impressive to watch them flipping, doing barrel rolls, and slicing through the water with gaping mouths during feeding times. Which is an amazing sight, considering they can get up to 7 meters across.

Mobulas are smaller versions of mantas, getting to 5 meters across and weighing up to a ton. Mobulas are also known as devil rays or flying rays, known for their affinity for breaching when seeking a mate. Similar to mantas, mobulas need to move to breathe, constantly swimming from birth to death.

Undoubtedly the most notorious of all the rays, sting rays can grow to be the size of a man. Since the untimely death of Steve Irwin by the barbs of a sting ray, these misunderstood creatures have recently taken a lot of heat. However, it’s important to note that sting ray fatalities are incredibly rare, as it takes them a long time to regrow barbs.
Sting rays aren’t all bad, however, in fact, reports are that Ancient Greek dentists used the venom in the stingrays as an anesthetic.

Like sharks, it is difficult to get an exact number on how many rays there are left. As you might have guessed, these giant beauties have no natural predators but still, mantas are classified “vulnerable” and their numbers are decreasing all around the world. Due to their size, speed, and overall curiosity, they are quite easy to catch, either intentionally or due to bycatch. Often, mantas get caught in nets intended for other fish, but they are unable to get out and suffocate. Furthermore, mantas are intentionally caught and their gill rakers are dried and shipped to China, where people believe that they have medicinal value. Needless to say, much like shark fin soup and ivory, there is absolutely no proof that gill rakers contain any medicinal value whatsoever.


Much like sharks, elephants, rhinos, and many other endangered mammals, mantas have a long gestation period. They are pregnant for a year and wait 2-7 years between pregnancies. Additionally, mantas only to give birth to one offspring at a time.


Speaking from personal experience, mantas have an affinity for people, and will often swim over the bubbles of a nearby diver. However, irresponsible tourism is just as detrimental to manta numbers as unregulated fishing tactics. If you do wind up swimming with mantas, make sure it’s at a responsible location.


In the video below, Guy Stevens a divemaster in the Maldives, speaks on the intelligence of these beautiful giants.